Often, when the best come together – there‘s a reason to shoot for the National Record!

And when the best come together at the airfield – the Record will surely have to do with the world of Skydiving!

The year 2020 was far from usual and not always in a good sense, but the two National Records, set with the use of Skylark canopies, really made up for all the misery!

June 1st 2020.  The team «Freedom» of the Ukrainian Army, set the Ukrainian National Record of canopy relative work in the category «Big Formations» at night. The judges of the record have confirmed a stack of 6 canopies of Commodores (https://skylarkparachutes.com/commodore/) in the night sky. The names: Alexandr Trotsenko, V. Shishkin, Dmitry Obuhovsky, A. Zimenko, V. Kanarsky, S. Kotliarov entered the history of Ukrainian skydiving forever!

And nothing makes a canopy designer happier than events, where our technology proves itself with real and factual accomplishments! 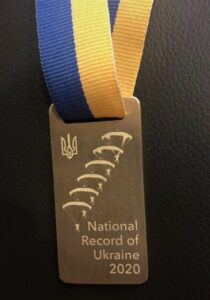 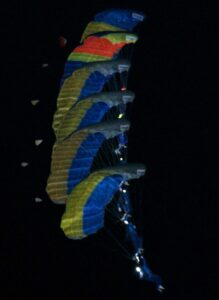 August 28th 2020. Another unique event took place on dropzone Borodyanka <DZ Boro>, again, not without a canopy from Skylark! This time – the National Ukrainian Record «The first tattoo, done during a tandem skydive».

ChinookEVO 315 was ‘the weapon of choice‘. Yaroslav managed to  put a tattoo on Damir’s arm (the cutest biplane) sometime between the canopy opening and landing. The tandem master’s hand-cam witnessed that the flight was so smooth and the descent so relaxed, that the pair had enough time to enjoy the sunset and the flight after finishing the tattoo.

The technical facts of the Record are really impressive – The canopy opening took place at 3600 meters; the time of the descent under the canopy was exactly 11 minutes; the average vertical velocity in full speed mode was 5.45 m/s (at high altitude the air density is lower).

We are very pleased with how our canopies performed! Each announced feature of Skylark wings is now confirmed by the Book of National Records of Ukraine!

We are grateful to each of our new record holders for the trust they put in Skylark products.But onwards and upwards, right? Always forward!